The second week of February was a very profitable one for the crypto industry. Prices began to surge rapidly around 8th February, alongside trading volume. Bitcoin and Ethereum have been marked by particularly strong surges, with them both hitting new all-time highs during last week

Earlier this year, on 8th January, Bitcoin price reached a new all-time high after reaching $42,000. After that, the coin’s value dropped strongly, and then fluctuated between $31k and $35k for around a month. This finally changed on 8th February when a new surge allowed the coin to skyrocket again and make a new all-time high at $48,200.

The surge started seemingly without warning, and it took the coin from the daily low at $48,134 to $48,200 exactly, according to data from CEX.IO. While the surge was followed by a correction, it was rather mild, only causing the coin’s price to drop to $43,800 on 10th February.

After that, BTC surged again, this time once again hitting a new all-time high at $49,019. This price was reached yesterday, 12th February. Since then, the coin once again saw a drop, trading at $47,406 at the time of writing.

While the surge did come suddenly, it was not without reason. In fact, the price of the coin skyrocketed around the time it was revealed that Elon Musk’s Tesla had bought $1.5 billion worth of Bitcoin, and that it might accept Bitcoin payments in the future.

Elon Musk’s popularity in the crypto industry has been growing gradually for years, while the world’s richest man casually dropped crypto references on his Twitter every now and then. Over the past few weeks, however, Musk is mentioning Bitcoin and Dogecoin on a daily basis, and he even proclaimed himself an official Bitcoin supporter.

While all eyes are usually on Bitcoin when major rallies come around, Ethereum’s own success over the past week cannot be overlooked. The coin saw a major surge around the same time as BTC on 8th February, however, unlike Bitcoin which traded sideways before that, ETH price had been making waves for days.

Ethereum actually did not wait for Bitcoin’s lead to start surging. Its growth from the depths to which a previous correction took it actually started on 7th February. After regaining what it lost, it only continued surging up on 8th February, with the BTC rally helping it rise above all past records. 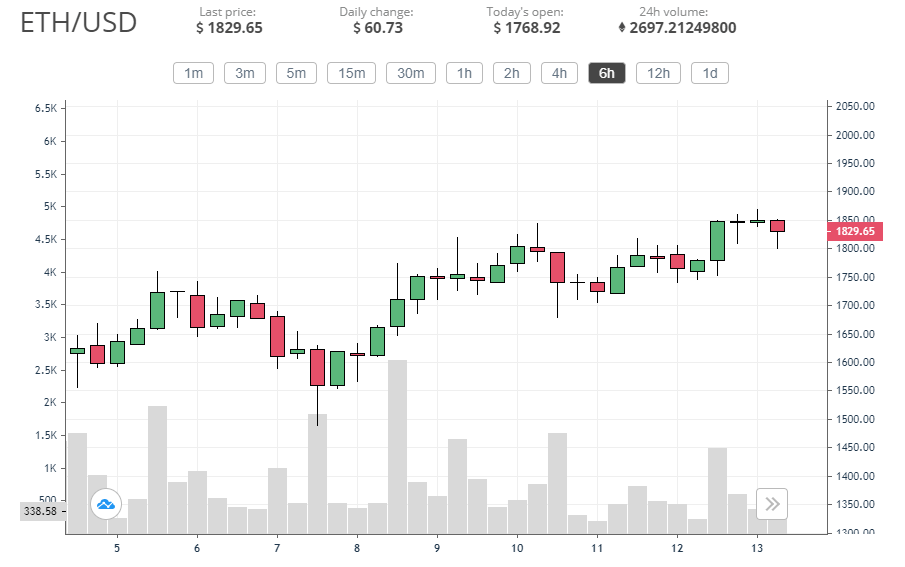 By early 9th February, Ethereum hit a new all-time high at $1,826, only to beat its own record on February 10th by taking an extra step up to $1,844. The coin then struggled with a correction that attempted to push it down for two days, finally overcoming it yesterday, 12th February.

As BTC reached its own latest record, so did Ethereum go further up to $1,870, breaking the record once again and forcing itself one step closer to $1,900, and then the $2,000 mark.

Where are Bitcoin and Ethereum going next?

We believe Bitcoin could keep going up even further, and that it will complete the quarter by hitting $50,000. The coin is already very close to this price, but it seems to be struggling to break through resistance at this level. The move past $40k resulted in a correction that BTC took a whole month to overcome.

Now, it has managed to climb up to a new record of $48k, with $50k just around the corner. This is a major psychological barrier too, and once it is broken, we expect Bitcoin will be able to surge even further up, likely to $80,000 by 31st June, and maybe even to $90,000 by the end of the year.

As for Ethereum, we expected Q1 to end with a price of $1,300, but Ethereum’s performance has exceeded expectations. Etherum has now skyrocketed nearly to $2,000 and is only a short step away from hitting this milestone. At the rate things have been going for it, ETH might reach $2.2k — a record we expected to see by the end of Q2 — before the first quarter is complete. However, nothing is ever certain, and past predictions may yet turn out to be correct, although, at this point, that would mean a strong correction by the end of Q1.

In the end, nothing is certain in the crypto industry, and for now, at least, the prices are significantly stronger than anyone expected them to be.

Ethereum price slips 7%,could test $1,500 ahead of London upgrade